Endodontics
What is endodontics
Endodontics is the field of dentistry that deals with the diagnosis and treatment of the diseased pulp of the tooth.

Due to the presence of nerves within the tooth, the tooth senses various stimuli (e.g., cold, warm) and translates them as pain of different intensity depending upon the intensity of the stimulus.

In cases where part of the tooth is damaged such as in a tooth fracture or tooth decay then the tooth perceives more audible stimuli. Continuous stimulation may cause inflammation of the nerve resulting in severe pain (pulpitis). Pulpitis is not always reversible and can lead to necrosis of the nerve. Necrosis can also be caused when the nerve is exposed to the environment of the mouth when the fracture or the cavity extends to the pulp of the tooth. Finally, strong occlusal forces applied on the tooth may crush the nerve at the apex of the root leading again to necrosis. 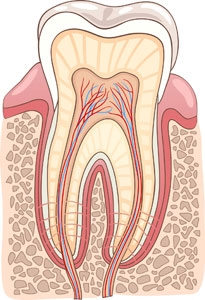 Anatomy of the pulp 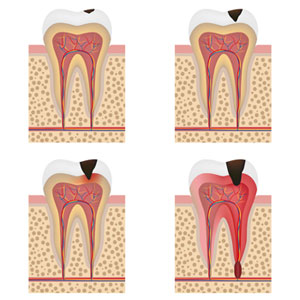 Decay that leads to pulpitis and pulp necrosis

Although the dead nerve does not induce pain to various stimuli, necrosis and contamination of the exposed nerve produces products of inflammation and sepsis. These products are usually discharged from the apex of the root and induce resorption of the jaw bone. In order to avoid contamination of the jaw bone the body contains these deleterious products in a cyst. If the cyst continues to expand it may lead to a painful abscess.

To address all these problems it is necessary to do a root canal therapy. 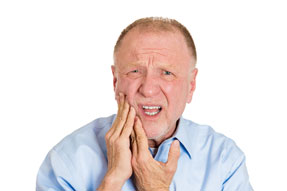 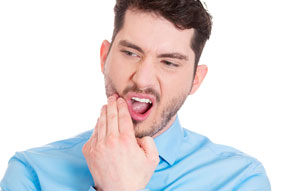 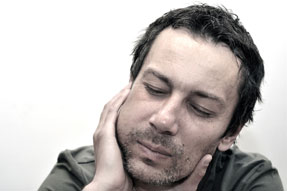 Swelling and toothache due to an abscess

A root canal therapy is performed in order to address problems caused when the nerve of the tooth is inflamed or dead.

It is performed under local anesthesia and the process comprises the following steps:

1) Removal of the decay.

2) Preparation of a small access hole at the top of the tooth in order to gain access to the pulp of the tooth.

3) Removal of the pulp with special files.

4) Decontamination of the root canals to eliminate the bacteria that have invaded in these areas.

5) Once sterilized the canals are dried and a soft filling material (gutta percha) is placed to fill the clean and empty canals.

6) A final restoration such as a fillings or a crown is placed to cover the access hole and seal and protect the treated root canals from recontamination.

Stages of root canal therapy:
1) necrosis and nerve infection due to caries
2-3) preparation of access hole, pulp removal and decontamination of root canals,
4) sealing of root canals with gutta percha and
5) final restoration with tooth filling or crown.

Since a clean and sterile environment around the tooth is required for effective decontamination of the root canals, during the root canal treatment a special rubber band is placed around the treated tooth in order to isolate the tooth from the saliva.

Finally, it is clear that the difficulty of the treatment increases as the number of the roots and their curvature increase

Re-treatment of a root canal therapy

Sometimes, although a root canal therapy has been performed in the past the tooth continues to bother the patient or may present with an abscess. Most often, this is due to inadequate removal of the pulp or decontamination of the root canals during endodontic treatment. This enables the remaining bacteria to organize and cause these unpleasant situations. Also, poor oral hygiene may lead to the formation of a new cavity that may expose the treated root canals to the environment of the mouth and hence result in its recontamination. In any of the above cases, the root canal treatment must be repeated.

If, despite retreatment the tooth continues to present problems, then the only resort, before extracting the tooth, is apicoectomy.

Necrosis and infection of the nerve of the tooth can lead to the formation of a cyst in the jaw bone at the apex of the root. This cyst may contain bacteria and products of inflammation and sepsis derived from the dead pulp. After root canal therapy the pulp is removed and the root canals are decontaminated. This leads to the absorption of the cyst and the formation of new bone around the apex of the root. However, if the cyst is not absorbed and the tooth continues to be symptomatic, then the problem may be solved with apicoectomy.

This is a minor surgical procedure that is performed under local anesthesia. The dentist gains access to the tip of the root and removes the cyst along with the apex of the root. Finally, a filling material is placed at the new apex in order to seal the remaining root.

Healing is fast and relatively painless. Besides some mild pain killers, the patient usually takes antibiotics for 5-7 days.

Is the root canal therapy painful?

The root canal therapy is performed under local anesthesia and therefore the procedure is painless. However, occasionally, during treatment the tips of the files used and small amounts of disinfectants may come out from the apex of the root and this may irritate the surrounding tissues. Thus, when anesthesia wears out, the patient may feel some discomfort which is relieved with mild pain killers.

Why might the completion of a root canal treatment be delayed?

There are several reasons that may delay the completion of a root canal treatment, such as:

1) difficulties in locating all the root canals of the tooth,

2) the roots have pronounced curvature and special care needs to be taken in order to avoid root perforation,

4) the root canal has been calcified and prevents the files to reach the apex of the root.

What is root perforation

In some cases when the roots are very thin or present with pronounced curvature the technical difficulty of a root canal treatment increases. The small files used to remove the pulp may not be able to follow the sharp curvature of the root and thus cause a root perforation. If the perforation is located near the crown of the tooth then it can be sealed with a special filling material. Then the root canal therapy can be continued and completed. The prognosis of the tooth is usually good and the tooth will be monitored for some time. However, in most cases the perforation occurs close to the apex of the root and the difficulty to seal the perforation usually leads to extraction of the tooth.